You are here: Home / VPN / How to Watch Netflix with Surfshark

Before we begin with a tutorial, you’re probably here because you’d like to know whether Netflix works with Surfshark. The answer is yes, Surfshark unblocks Netflix and more than 16 of its libraries from anywhere in the world.

Netflix is one of the leading streaming services even today and has more than 223.09 million subscribers since the third quarter of 2022. The number of subscribers keeps rising by the day, but there’s one issue; Netflix is geo-restricted in most countries around the world. Even if Netflix is available in your country, its libraries are regionally-restricted.

For instance, if you’re in Canada, you can access the CA Netflix library. However, if you’re looking for more content on the US library, you won’t be able to access it. You could unblock it by changing your IP address to a US location, and for that, only the best VPN for Netflix can help. Right now, Surfshark is one of the best VPNs that work with most Netflix libraries, and especially the US one.

In this guide, I’ll show you how to watch Netflix with Surfshark, how to get a subscription, and a troubleshooting guide you can use when Surfshark is not working with Netflix.

Netflix is available in more than 190 countries worldwide. However, its libraries are restricted according to the region you’re in. For instance, people in the US won’t be able to access the Canadian Netflix library, and the people in Canada can’t access the US library. The only way to get past these geo-restrictions is by changing your IP address with a VPN that works with it.

Does Surfshark work with Netflix?

Yes, Surfshark works with US Netflix and many other libraries. With the Surfshark app, you can connect to any of its servers that are optimized for Netflix and access it worldwide. When we tested the VPN, we noted that the Boston VPN server was the quick option to unblock the US Netflix library with Surfshark.

Other than that, you can unblock and access up to 16+ libraries with Surfshark. If there’s a device that doesn’t support native VPN app installation, you can use the Surfshark Smart DNS tool to watch Netflix. Since the US library is currently the most popular, our guide below will show you how to watch US Netflix with Surfshark from any country.

How to watch US Netflix with Surfshark

The Surfshark American VPN servers work with more than just US Netflix. You can use the same servers and access other platforms like Hulu, Amazon Prime, Disney+, HBO Max, and many other platforms from any country outside the US.

Why do you need Surfshark for Netflix?

It comes with 3200+ servers in 100 countries, with most of its servers optimized for Netflix. This way, with Surfshark, you can unblock different Netflix libraries, including the US, Australia, Germany, Romania, Japan, South Korea, India, Canada, and others. Plus, you also need Surfshark for Netflix to bypass ISP throttling. There are times that your ISP limits bandwidth, restricting your speeds. With Surfshark, you can fix the issue since it offers unlimited bandwidth.

How do you subscribe to Surfshark to watch Netflix?

How much does Surfshark cost to unblock Netflix?

Surfshark is one of the more affordable VPNs. The best package it offers is the 2-year plan, where you get 2 months free. It costs around $2.05/mo. The 1-year package costs $3.99/mo. and the 1-month plan is $12.95. We recommend getting the 2-year package since it’s the most affordable. The best part about Surfshark is that it allows unlimited device connections and supports all popular apps and OS. Since Netflix allows up to 2-4 screens, you can share your account with the family using Surfshark, or utilize it for your Smart TV or smartphone simultaneously.

Sometimes the issue is not in the VPN you use but rather in the device and network. Before checking to see if the Surfshark app is working with Netflix, you could always restart your device, and switch the router off and on after a few minutes. This is one of the simpler ways to eliminate any network issues. If Surfshark is still not working with Netflix after the reboot, check other troubleshooting options below.

Only some VPN protocols are the best for streaming. Some work better for stable speeds, some for torrenting or gaming, and particular ones for streaming. When or if that happens, open the Surfshark app, disconnect from the server you’re connected to if you are, and go to “Settings.” Click on the “Advanced” tab and switch the server to “OpenVPN (UDP).” Reconnect to the US server and check if Netflix is working with Surfshark.

Surfshark gives you 600 US servers in its network coverage. When we tested Surfshark with Netflix, we used the Dallas and Boston US servers, which worked quickly. However, if these servers don’t work for you, you can always switch to another server. This usually happens when Netflix detects and blacklists certain IP addresses that are used by subscribers in a country outside the Netflix region. There’s US coverage in Ashburn, Bend, San Franciso, San Jose, Seattle, Los Angeles, Las Vegas, Phoenix, Salt Lake City, Denver, Miami, Houston, Dallas, Tampa, Orlando, Buffalo, Detroit, Atlanta, St.Louis, Boston, Charlotte, Latham, Chicago, and New York.

Little trails of your original IP or location are often traced back to your browser’s cache. If Surfshark VPN is not working with Netflix, clear the cache from your browser.

For Google Chrome, click on the Windows key and type Chrome. Press on “Ctrl + Shift + Delete” to open the “Clear browsing data” window. Choose “All time” from the “Time range” tab. Tick the box that says “Cookies and other site data” and “Cached images and files.” Scroll to the bottom and click on “Clear data.” Now you should restart the browser, sign into Surfshark, go to Netflix and start streaming.

Lastly, check to see if the VPN is up-to-date. To do that, open the Windows Settings, go to “Apps” > search for Surfshark, click on Uninstall, and click on the Uninstall button again to reconfirm. Once it’s reinstalled, choose a good server and connect to the VPN. Now try checking Surfshark with Netflix.

Why is Surfshark one of the best VPNs to unblock Netflix?

There are many reasons why Surfshark is good to unblock Netflix, among many other streaming services. Firstly, it gives you access to 3200+ servers in 100 countries. You can connect with any of its global servers to access an international Netflix regional library in your country.

Secondly, when we tested the VPN, the server speeds never went lower than 89Mbps, even on long-distance servers. All of its apps operate using AES 256-bit encryption and industry-leading protocols like OpenVPN and WireGuard, all of which can secure your connection, protect your device, and keep your data and location anonymous online, even while streaming on Netflix.

It allows unlimited device connections and supports apps for all the popular devices. Even if you have a streaming device for Netflix that doesn’t support native VPN apps, you can use the Surfshark DNS to configure the VPN via router support. Surfshark is great for Netflix and is also one of the most affordable VPNs today. It has a free smartphone trial and a risk-free 30-day money-back guarantee for all devices and OS.

How to watch Netflix with Surfshark on supported devices

There are many devices that you can use to stream Netflix content. It’s compatible with Windows, Android, iOS, macOS, Firestick, Roku, and a variety of Smart TVs. For you to start, we’ve highlighted some tutorials for you below on popularly used platforms:

Watch Netflix with Surfshark on Windows

Watch Netflix with Surfshark on Android

Watch Netflix with Surfshark on iOS

Watch Netflix with Surfshark on Firestick

Best movies to watch on Netflix with Surfshark

Best TV shows to watch on Netflix with Surfshark

How do you use Surfshark VPN with Netflix?

First, subscribe to Surfshark, and download the VPN on your device. Sign in and connect to the server of the Netflix regional library you want to access. All that’s left is to open the Netflix app and start streaming.

Does Surfshark work on Netflix?

Creating your Netflix account is simple since it’s available in more than 190 countries. Go to netflix.com, choose a subscription plan that is the best for you, create your account by providing an email and password and select a payment method.

Can I use a VPN for Netflix?

Yes, you can use a VPN for Netflix. However, you won’t be able to use just any VPN since Netflix blacklists VPN IP addresses. Right now, Surfshark is one of the few VPNs that work with Netflix and other streaming services.

No, Netflix did not block Surfshark. It still works with American Netflix. You can use its USA VPN servers to access the US library from anywhere. It offers an extensive catalog of US movies and TV shows you can stream from any country.

Is Surfshark a good Netflix VPN?

Yes, Surfshark is a good Netflix VPN and works well to unblock multiple Netflix libraries from anywhere. You can always contact support if you can’t find the best server.

Can Surfshark unblock the US Netflix library?

Not only the US Netflix library but multiple other regional libraries.

What countries does Surfshark work with Netflix?

Surfshark offers access to the US, Canada, Australia, Japan, Italy, Mexico, and several other Netflix libraries.

Netflix is not blocking VPNs, but IP addresses that are detected. This usually happens when you use a free VPN. Surfshark offers affordable price packages that are practically free. In fact, it makes a safer option to use rather than a free VPN.

Why am I getting the Netflix NW-2-5 error with Surfshark?

This error has nothing to do with the VPN. It usually takes place when there is a connection issue between the Netflix servers and your device.

Yes, it does. Surfshark gives you access to 3200+ servers in 100 countries, including JP servers, to access the Japan Netflix library. You can also use Surfshark to access other streaming services like Hulu, BBC iPlayer, Amazon Prime, and Disney+ other than just Netflix.

Can I use Surfshark for Netflix on Smart TV?

Yes! Surfshark allows unlimited device connections and supports Smart DNS. You can configure it on your router to create a connection to your Smart TV.

Yes, Surfshark has been tested by our team and many other users globally, including Hong Kong. It works in many countries around the world.

That’s a wrap! You now know how to use Surfshark with Netflix and how to sign up for the service from any country. We’ve also highlighted the best servers you can connect with to access it. 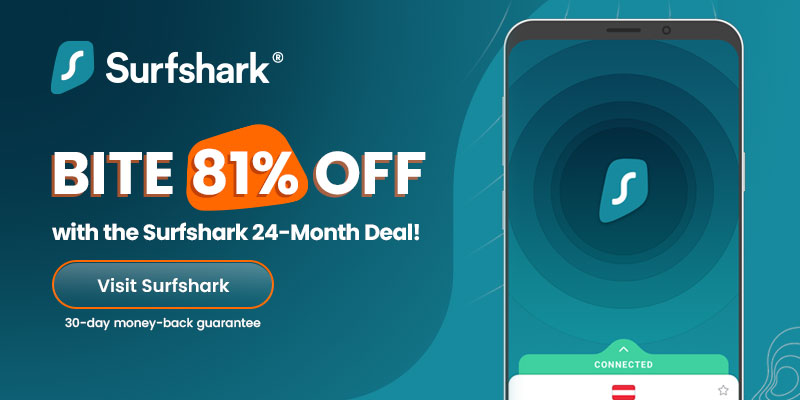