You are here: Home / Channels / How to Watch SonyLiv in USA

SonyLIV is an exclusive Indian streaming service available to users in India. You will find content ranging from Indian Idol, cricket, WWE, UFC, and other popular shows. However, if you’re planning on accessing SonyLIV in USA, you will need an Indian IP address. Without it, you will see the message “We miss you too! Looks like we are not here yet.” You could watch SonyLIV in USA via SlingTV, but that won’t be cost-friendly! It’s why we recommend using the best VPN, connect to an Indian server, and stream SonyLIV for free in the US and worldwide!

The best VPNs to watch SonyLIV in USA are 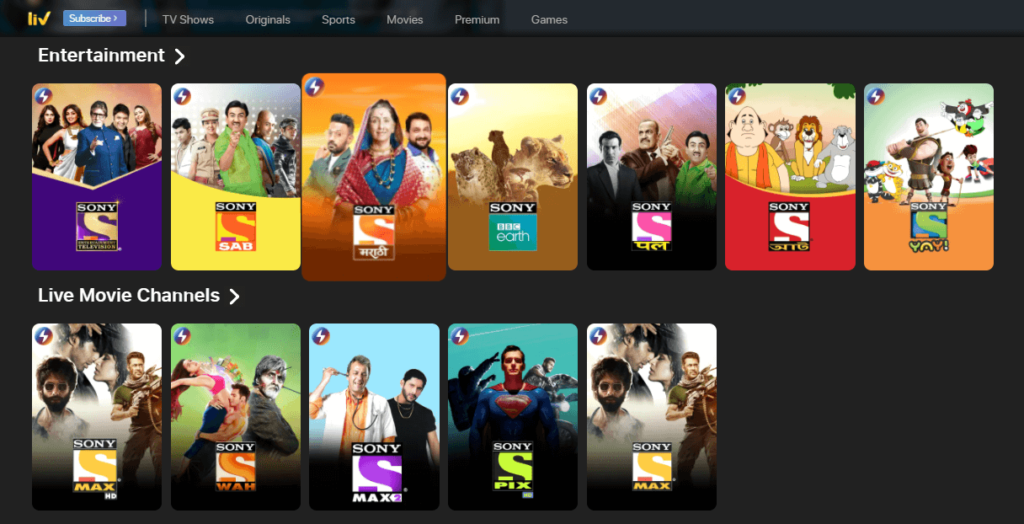 Using any one of the best VPNs, you will be able to stream any SonyLiv content that you want. For starters, there are a couple of its movies currently ranking on IMDb, some of which include Scam 1992, Gullak, Girls Hostel, Shantit Kranti, and much more. All you need to do is get access to any one of the VPNs Indian servers, and you’re good to go. Just in case you don’t know how to get started, there are a couple of tutorials ahead that will help you out!

For now, here are the best VPNs to watch SonyLIV in the USA:

It’s the best top-tier provider that offers the fastest speeds for streaming. Within its network of 3000+ servers in 94 countries, it offers a couple of Indian servers that do work with SonyLiv. What’s more? The security features are some of the best for online privacy and to bypass ISP throttling. Even if you find that app a tad bit expensive, there is a free trial and a 30-day money-back guarantee.

Surfshark is another one of the best, especially if you have a lot of streaming devices that need protection or that are in use. It’s because this provider allows unlimited device connections, fast streaming speeds, geo-spoofing features and Indian servers that are the best for unblocking SonyLiv in the USA. Not only is Surfshark cheap, it offers a free trial and a 30-day moneyback guarantee.

Watch SonyLiv in USA with Surfshark

One of the more affordable VPNs, which also offers an Indian server for you to watch SonyLIV in the USA and abroad. It offers around 550+ servers in 40+ countries, including India. FastestVPN is not only reliable and secure, but is great for all those who are on a tight budget. It’s lifetime plan seems the most convenient. There is no free trial, but you could go for its 15-day money-back guarantee.

Watch SonyLiv in USA with FastestVPN

How to watch SonyLIV in the USA

Also read: How to Watch CraveTV in USA

How do you watch SonyLIV in the USA via Android devices?

How do you watch SonyLIV in the USA via iOS devices?

Is it necessary to use a VPN to watch SonyLIV in the USA?

Just like most streaming services, like CraveTV and others, SonyLIV is also one of the many that are subjected to geo-restrictions. It’s available in a little over 167 countries around that world, excluding the USA and a few other countries. With that said, you won’t be able to watch any SonyLIV content in the USA or anywhere outside the SonyLIV territories.

If you’re living in the USA, and are attempting to watch SonyLIV, the service will immediately detect and block your local IP address. However, with a VPN, and with connection to any one of its Indian servers, you will be able to replace your local IP with an Indian one and then access the service.

With that said, you will be able to bypass the SonyLIV blocking algorithms, and then access your account. This is especially convenient for all those who had a SonyLIV account and then moved to the USA.

How much does a SonyLIV subscription cost?

The SonyLIV subscription falls into 4 plans:

Also note that to sign up for a SonyLIV account, you will still need to enter in a valid Indian cell phone number, an email address or an additional social account details to create your account.

SonyLIV is not working! Fix the issue now!

There are times you might experience an issue getting access to a particular streaming service, even if you’re connected to a VPN. So, if you’re connected to the VPN, and to an Indian server, and seem to experience an acn01 error on SonyLIV, you can use a simple fix. All you need to do is clear out the app’s data and cache on your device. Other than this, you can also check to see if the app you’re using is an older version. If yes, update and reinstall it.

What channels are available on SonyLIV?

These are just a few of the more popular channels available on SonyLIV:

If you wish to see more, here’s a link.

Is the SonyLIV app safe?

Yes, it is safe. There even was an app bug issue that was resolved. All SonyLIV data entered is secured as well.

Is it illegal to use a VPN to watch SonyLIV in the USA?

So far, there is no statement that says using a VPN to access SonyLIV in the USA is illegal. You can use one if you’re traveling to the USA, and would like to access SonyLIV. However, make sure that you don’t use the VPN for any illegal purposes.

SonyLIV is available in full swing to users in India, and now to a couple of countries around the world, except the USA. With that said, and as mentioned above, the best way to access it, is by using a VPN. We’ve recommended the top 3 providers that are the best, that offer Indian servers, and are secure.