You are here: Home / Channels / How to Watch ZEE5 in USA

ZEE5 is one of the more popular streaming services available to users in India. It used to be blocked in the USA, but as of June 22nd 2021, it’s now available for users to enjoy. However, apart from that, ZEE5 is only available within 190+ countries. So, if the streaming service is not available where you’re located, then this guide will help you get that sorted! Need to know how to watch ZEE5 in USA or abroad? Head over to the tutorial below!

How to watch ZEE5 in USA

Watch ZEE5 in USA with ExpressVPN

How to watch ZEE5 on your Android device

Whether it’s your smartphone or your smart TV, if you have a device that is powered by Android, and you wish to stream ZEE5 on it, then it only takes a few simple steps. Since there is a dedicated ZEE5 streaming app available on the Google Play Store, you won’t encounter any issues downloading it. If, however, you’re not able to access the app on the Play Store that is where a VPN can help out. It helps you bypass the many geo-restrictions that come your way. Here is how you can watch ZEE5 on any Android device:

If you haven’t already subscribed to the ZEE5 service, you can take a look at the tutorial below to get started.

How To Watch Zee5 On Your iOS

To watch ZEE5 on your iOS, you can follow these practical steps to get along.

How much does ZEE5 cost?

Before heading on to how you can sign up for a ZEE5 account, let’s first talk about how much ZEE5 costs and compare it to the price in the USA after conversion.

On ZEE5, you have the option of choosing to stream content from both the free and premium options. If you’re more interested in only streaming the free content, all you need to do is register yourself by creating your account and start streaming immediately.

On the other hand, if you’re planning on getting your hands on some premium content that the ZEE5 service offers, you will need to sign up for the premium account. The ZEE5 prices were recently changed, offering two packages to choose from. Here’s what the ZEE5 premium subscription costs: 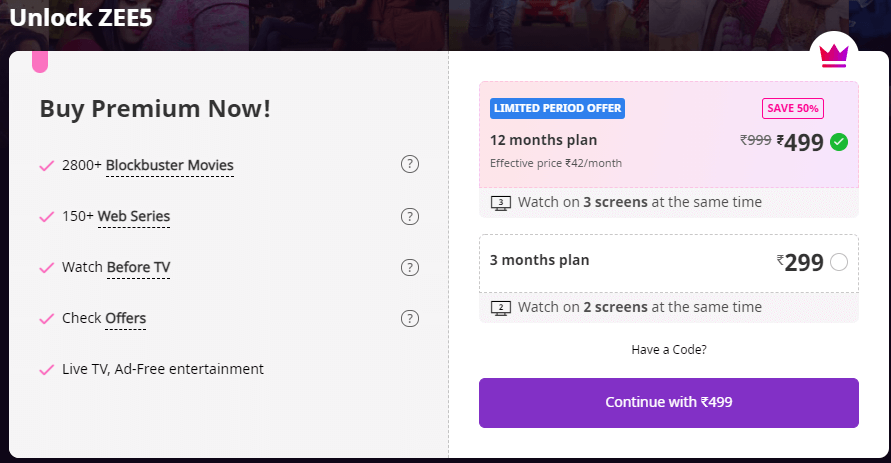 This is pretty affordable if you think about it. If you sign up for a ZEE5 account in the US, the 12-month or the 3-month plans after conversions will cost you slightly more than what you’re paying for in India. Even though ZEE5 is now available in the US, we still recommend using a VPN to access ZEE5 in the US, and connect to an Indian server so that you pay a slightly cheaper fee.

The best part about creating a premium account with ZEE5 is that you will be allowed 6 multi-device connections. So, if you’ve got the ZEE5 account downloaded on 6 different devices, you will be able to simultaneously log into your account on it.

Related: How to watch Voot in USA

How to Access Other Streaming Sites From India With a VPN

Not satisfied with Zee5 media content or find nothing of your choice, you can always fluctuate to other amazing media streaming sites such as SonyLiv, Hotstar, Jio TV, etc. With a VPN for India, you can access media streaming sites and enjoy enticing content by tricking the apps with an Indian IP address that will look like you are streaming from India.

A VPN allows unblocking media content from different regions with its fast connectivity features. Moreover, its military-grade encryption facilitates the user with strong security and privacy.

You can prevent all problems related to bandwidth throttling, data leak, identity theft, and cybercrime threats by securing your internet activities with a protected shield with a VPN.

Can I watch ZEE5 in the USA?

Yes, you can. ZEE5 used to be blocked in the USA once upon a time. However, apart from being available in 190+ countries, it is now available in the USA. We still recommend connecting to a VPN’s Indian server for quicker access to the service and for a cheaper subscription fee.

What devices is ZEE5 compatible with?

As mentioned above, ZEE5 allows users with a premium account to make up to 6 multi-device connections. Other than that, there are certain apps that are not compatible with the ZEE5 app, regardless of it being accessible via the website itself. With that said, here are the devices that the ZEE5 app is compatible with:

Do I need a subscription with ZEE5 to stream its content?

Yes, and no. It all depends on the kind of content you’re trying to access. For starters, ZEE5 offers a free version of its service but with limited content. You will need to subscribe to the service if you need to access the premium library.

What kinds of payment methods does ZEE5 offer?

You have the option of paying with your credit cards, debit cards, net banking and wallets.

Is there a free trial available for ZEE5 users?

Yes, ZEE5 does offer a free trial of 15-days over the yearly subscription plan, and a 7-day trial for the quarterly plan.

Flooded with exciting media content, Zee5 is an impressive media streaming site. Recently accessible in 190 countries, Zee5 is geo-blocked in the USA. However, since you have learned all the methods of accessing ZEE5 residing in the USA, you shouldn’t worry about streaming its content.

Moreover, by getting a subscription to a VPN, you can unblock a plethora of demanding media content that you are deprived of by annoying geo-restrictions.

Also Read: How to Watch CraveTV in USA